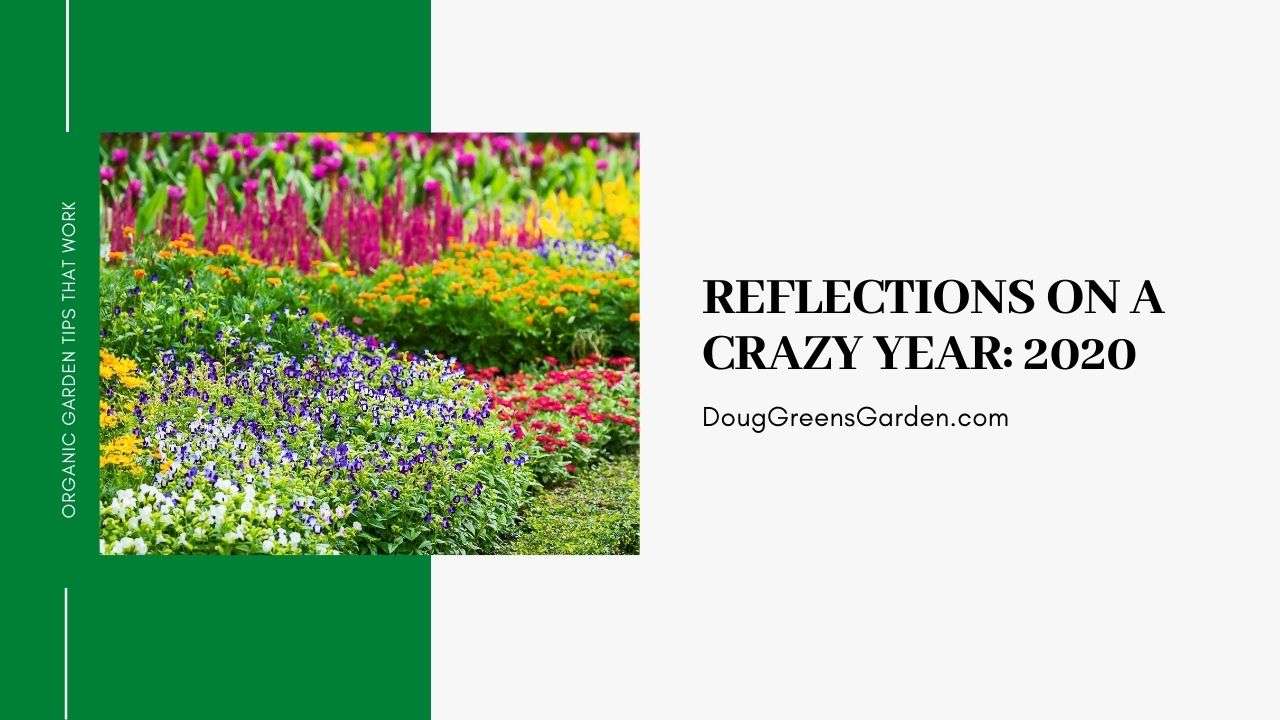 Home » Reflections On A Crazy Year: 2020 In The Garden

This garden year started for us in early March with a mad dash from our Southern place to our island refuge. (As a friend noted, it’s a wonder the state troopers didn’t stop us (but I was far from the fasted machine on I-95)

And with that introduction to a blog that hasn’t been updated in a while, allow me to ramble a bit and make a few observations.

There are years when a neat, well ordered garden doesn’t matter. Let me be clear, there are always weeds in my garden:

That’s just the way life works around here. (If it works differently for you – fine – it’s your garden.)

I’ve managed to hold them back this year by doing a few minutes every morning and pick them as I walk the garden. (Mostly quack-grass this year with dandelions thrown in for good looks.)

I Have A Lot To Learn Yet

You know, after over 40 years in a garden, you might think I’ve got it all figured out.

Not a chance. No.

This year is turning into a year of extremes, we’ve had extremes of weather – mostly hot – threatening to dry our clay soils to dust. And my body doesn’t “do” heat very well, so it’s a learning curve to allow things to go completely undone and forgive myself to that. Forgiving myself has been the challenge I’ve accepted (and mostly winning… mostly.)

We’ve also had extremes of growth – from “Where is it?” to the “Tomato that ate New York.”

Watering In A Heat Wave

We’ve had sprinklers running constantly to keep plants alive – never mind thrive – and next year I’m installing drip irrigation. Seriously, even though I have a full nursery’s worth of overhead sprinklers, I’m going full drip.  I’ll have those design details and installation in a future note.

The perennial front garden – the plants transplanted last fall – is doing okay with lots of water. But it’s not celebrating out there by any means.  There are more than a few misplaced plants that will be moved this fall again to take advantage of a bit more (or a bit less shade).

I’ve had hoses (200-300 feet long) running to our trees and simply dropped between them and allowed to spill freely into the bone-dry soils in an effort to keep them alive. A few trees lost this year’s tender growth (it dried up and died) in an effort to preserve water and even running some of those hoses all day didn’t work to keep them healthy.

Remember mature trees use several hundred gallons of water a day and when you have a lot of them, it’s impossible to keep them all happy with a hose and a well pump. We’re doing our best, and hoping.

The new vegetable garden is …  well, it is. And that’s about all I can say. The tomatoes got away from me and the best I can say is I’ve controlled the weeds but the tomatoes are a tangled mess of unpruned splendour.

We’ll get a harvest and will be able to collect seeds for next year so really, what more do we truly need? It ain’t pretty but who really cares unless you’re a lot more compulsive than either Mayo or I are?

The old vegetable garden was intended to be a wider range of plants but, again, the heat took its toll on my sweetie and I. We decided not to fight the weeds but to survive ourselves.

We’ll do better “next year.”

The real lesson this summer was to acknowledge there’s only so much you can do when “stuff happens”.   And being a (ahem…) senior means there’s less fuel in the tank to fight the good fight than there was a few years ago. (It is what it is and as long as I can fight that good garden fight at some level, then life is sweet.)

I kept the weeds down and the garden watered and growing and considered that a success.  There was a lot more I “could” have done but, in this heat, I decided it was a case of “coulda, woulda, shoulda.”

And I refuse to to feel guilty about taking care of ourselves first and the garden second.

The stone wall building is now on its last length with the massive – finger crushing stones laid as a foundation. I mostly worked at first light until the sun cleared the trees – on the wall and gardens themselves –  and when the temperature climbed, I made the sensible decision to not fight it (a bit of wisdom seemed to appear all on its own this year – maybe I’m finally learning. I took lots of noon siestas this year as well.)

Many of these foundation stones are well over 200 pounds. I tried very hard not to kill myself moving only 1 to 2 stones a day of those big foundation rocks.  And yes, I have a front-end loader to do the heavy moving but the placements and adjustment were all me and my pry-bar.

And now I’m working with smaller stones (the 20-30 pounders) it seems a lot easier. I have high hopes to finish the front wall this year when/if it cools down in September and October but…  We’ll see what the fall brings. Again, I’m only moving a few stones a day – again very early in the morning until the heat starts to rise.

It seems fairly smart – with Covid etc – to make decisions about gardening and landscaping that enhance life rather than shorten it. And if this means taking it easy on my body, then that’s what I’m truly trying to do.

I’m enjoying the garden this year and I can see its potential. By building stone walls around gardens, it makes it very difficult to expand them again (there’s method in my madness) 🙂

Mayo’s new vegetable garden will also have a stone wall of sorts (to stop rabbits mostly – we have an ugly chicken wire fence now that does the job) but that’s likely a next spring project after the front wall is finished.

Is the garden what I want it to be or envision it?  Seriously, if you have to ask that question, you haven’t gardened. It’s *never* what it should be (nope, never, ever.)

And for now, that’s what really counts. We can go outside to dream about what might be or could be. And we treasure the flowers and vegetables it produces even though it may not be the best garden in the neighbourhood (it’s not).

Gardening isn’t a contest. It’s a process and a dream in motion. It’s about going outside and touching another living thing that you’ve been nurturing to the best of your abilities.

So to those who feel badly because your garden doesn’t look as good as it could or should please consider the thought that “thou shall not should upon thyself.”

Take care of yourself and your loved ones first. And enjoy and treasure what joy and beauty your garden brings. Ignore what “coulda or shoulda” have happened in this rather crazy year. Ignore the neighbour who’s more compulsive or organized than you are. Or, the one that makes comments about your weeds. Or…

Take a deep breath. Get your hands in the dirt while you’re on your knees and smile because you can. Smell a rose. Pick a daisy and play “He loves me, he loves me not.”  (But cheat so he does love you.) 🙂

Gardening is supposed to be fun and if you’re not having fun out there, you’re doing something wrong.

I’ve retired to write more and help folks garden better. If you’d like to join this group, subscribe here

Click The LInk To Get My Best Gardening Tips